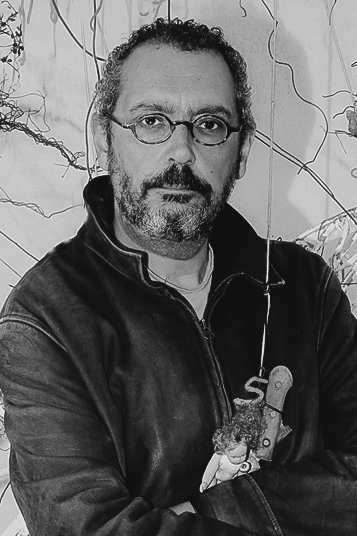 “The swift passage of time”

Director of the Luis Seoane Foundation

Systematizing and being aware that the creative stages cover specific periods is in itself an interesting reflection for those who travel through creative universes. Knowing that modular and compartmentalizing is also an order option that will serve as a vehicle for further analysis. And this is the decision that Xurxo Gómez-Chao (A Coruña, 1960) has made to face these three series that illustrate readings, experiences, personal passages linked to intimate territories or simply the curiosity of the individual who observes the atomized detail of a specific moment absolutely inconsequential. The best thing is how the artist can move that thought to a real state that, in addition, through the years has marked its own invoice. In the case of Xurxo Gómez-Chao, it is a manifest reality. From the mercurial field of the eighties to the happy foray into the technological field of the last fifteen years, he has chosen to establish the economy of resources in his compositions and an order that permeates every evocation. On this occasion, these three photographic series, which have been in the making for five years, are directly linked to the passage of time and to the desire to create the past again. The first of them is Hotel Earle in which its compositional language swings beyond post-truth. They are places that remain despite the flight of the beautiful and the conventional, leaving only the trace of what they have been. Light composition atmospheres but full of intention as if BartonFink had abandoned them, taking their sorrow with him and leaving the ethereal. Tempus fugit, the second of the series, is structured in sober and contrasting images between life and death, with the myth of Narcissus rehearsed in the duplicity of the different scenarios. On this occasion, taking the beautiful and silent resources of the series Treatise on Applied Botany that brought Gómez-Chao closer to an aesthetic suitable for turning nature into a minimalist option. Throughout Tempus fugit we can more easily link with that past of fictional realism that Xurxo frequently tries to unravel in his works. Finally, Paisaxe diffusa recounts the spatial transit that occurs at a specific moment in time. That magical place that “happens” in a precise moment and that, in this case, arises from the observation of the gradual transformation of the city (Valencia) when it abandons its urban morphology, giving way to the countryside and the orchards that surround it. In this series, a story is written that draws on the previous two: on the one hand, real spaces as happens in Hotel Earle; on the other, the nature that supports the description of the ephemeral and the borderline with life. In all of them there is, in a certain way, an evocation of objettrouvé that has served as a construct for previous works and series of great subtlety, with an intellectualized discourse that refers to mythology, the dilemma of choice and chance. All this without the viewer feeling the oppression of the artist’s knowledge and meticulous work. Magical.

“The swift passage of time”